"Fricasseed Rabbits" by Eliza Leslie, a dish from 1840 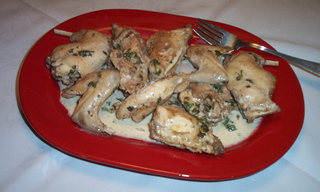 Rabbit simmered in a cream sauce, courtesy of Eliza Leslie (1840)

The Historic Setting
As we discuss in Northern Hospitality, game was neither as prominent in cooking sources nor as prestigious among the upper classes in New England as it had been among the aristocracy in England. Perhaps the difference in valuation can be attributed to the desire of the English colonists to distance themselves from the Indians' ways of obtaining food. For many settlers, too, hunting was a time-consuming activity of uncertain outcome that took the men of the household away from the important tasks associated with farming. Finally, we speculate, the plenitude of the resource in New England from the earliest years of settlement through most of the nineteenth century made wild game an important supplement to the diet but kept it from becoming the locus of leisure which it had been for the highest classes in England, where by law only the aristocracy could hunt it.

Now, however, among the gentry of our own day, game dishes have risen to the top of the fancy food pyramid. Game has become a favorite main course at dinner parties and a highlight of the menus in elegant restaurants. But that doesn't mean we average folk can't have a taste. Rabbit, especially, is quite reasonably priced relative to other meat. It's also rich in protein and poor in fat, music to the dietary ears of most modern Americans. Eliza Leslie's "Fricasseed Rabbits" ranks high among the most captivating recipes for game that we found in nineteenth-century cookbooks. So we encourage you to follow along as we cook our own version of this delightful dish.

Rabbit Hunting
At this time of year, wild rabbit season has concluded in most of New England and further south. But with a bit of effort, those of us who hunt butcher shops, farmer's markets, and grocery stores more often than we stalk our food outdoors can find fresh or frozen rabbit, both wild and domesticated. It is generally agreed that hutch rabbits are less lean and gamey-flavored than wild. However, we prepared the following dish using farmed rabbit and it was chock-full of flavor. In buying rabbit, take care to get a relatively small, young animal, though it should be substantial enough to supply meat for four servings. Older, larger rabbits, which some say are more flavorful than the younger variety, are naturally also tougher. The quick-cooking method of the fricassee (see below) works best with more tender meat. We found that a rabbit weighing a bit under 2 lbs. provided pleasant meat.

What's a Rabbit and What Isn't
The family Leporidae includes species of both hare and rabbit. Alan Davidson, the great encyclopedist of food, begins his entry on rabbit in the Oxford Companion to Food (1999) by pointing out the nomenclatural confusion of the terms used in North America to distinguish between rabbits and hares. Davidson tells us that Europeans would consider the American cottontail rabbit and marsh hare to be rabbits; the jackrabbit would be a hare. Ever the pragmatist, Davidson also points out that the main difference is that "the flesh of rabbit is pale and mildly flavoured," that of hare is "dark and often very strong." In Northern Hospitality, we also give a recipe for hare. It's by Englishwoman Susannah Carter and it appears in a colonial edition.

What the Fr__c is a Fricassee?
Fricassees aren’t made that often nowadays, but they were quite popular right through to the end of the nineteenth century. They were one of the many French dishes that the English had begun imitating and adapting in the seventeenth century. Although at first egg yolks were a basic ingredient, in the eighteenth century variations were developed substituting flour-thickened broth, cream, or combinations of these. Also fricassees were usually fried and then simmered, but later on recipes began to appear in which the initial frying was omitted. Leslie’s “Fricasseed Rabbits” is of this latter-day, simmered-only, thickened-broth-and-cream persuasion.

Our Version of Eliza Leslie’s Fricasseed Rabbit
First we made our rabbit multiply like, or rather into, rabbit pieces—9 in all, 2 legs, including thighs, 2 halves of the loin or saddle, 5 pieces of rib meat, with bone (the forelegs, head, and offal had been removed previously at the butcher shop).

Then we sprinkled the salt, mace, cayenne pepper, and parsley over the pieces, put them in a deep skillet, poured the warmed beef stock over them, and simmered them, turning them over several times as we did so.

When they were half done (after about 20 minutes), it was time to coat the six pats of butter in the flour, add them to the skillet, mix them in with the stock and rabbit pieces, and continue simmering until the pieces were tender, about 20 minutes longer. Then we put the cream and grated nutmeg in our gill measure (optional!—a plain old measuring cup will do just fine) and mixed it into the liquid in the skillet:

Our fricasseed rabbit was now ready to be enjoyed—a tasty alternative to simmered or fricasseed chicken!

Eliza Leslie’s original recipe, with commentary, can be found in Northern Hospitality, p. 210.