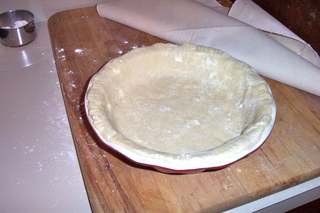 Bring Back Lard!
Here as promised is the crust we made to go with the peach-cum-pits pie we told you about in our last post. When we first made this shortcrust pastry, which was when we made it for the peach pie, we felt some trepidation about the addition of lard to the dough. We were novices at cooking with lard, and hadn't yet baked anything that included this—to us—new ingredient. Would the baked crust taste, um, piggy? On the other hand, we knew from our historical research that New Englanders had for a long time deployed lard in pie crusts to superb effect. The winning recipe in a 1939 New England apple pie contest called for a crust made with lard as the only type of fat. (Whereas Mrs. Webster’s Short Paste uses equal amounts of lard and butter.)

We made our version of Webster’s Short Paste with leaf lard, from the layer of fat around the kidneys of a hog. Leaf lard is considered the best type for cooking, especially baking. But you can make a perfectly fine pie crust with the hydrogenated lard that is often packaged in 1-pound boxes like butter and is sold in many supermarkets.

At any rate, our first bite of this crust made us into instant converts. Our notes on making it say it all: "This is the most delicious plain crust ever!" It is tender, yet substantial enough to hold up to the juiciness of fruit pies. So, as claimed by Mrs. Webster, it is excellent for fruit pies. It's also excellent for custards, vegetable pies, and meat pies. We just plain love it. Substitute ¼ teaspoon salt for the sugar in the following ingredients list when you are using it with a savory filling.

How We Made It
We stirred the sugar into the flour and rubbed the lard in by hand until the mixture resembled breadcrumbs or coarse meal. Then we added the cold milk, about a tablespoon at a time, mixing it in with a wooden spoon, until the dough formed a loose ball.

At one point, the dough got a bit warm and the butter a bit soft, so we refrigerated both for about 10 minutes before continuing. Since for most fruit pies the crust should be fairly substantial, so that the fruit syrup doesn't bleed through the bottom as it bakes, we left the crust quite thick in the final rolling out, about half an inch.

We chilled our short paste for 30 minutes in the refrigerator, then filled it with our peaches and pits and baked away, with the results described in our previous post.

Webster’s original recipe, with commentary, can be found in Northern Hospitality, p. 251.