“To rost a Capon with Oysters and Chesnuts,” from Hannah Woolley’s The Queen-like Closet (1670) 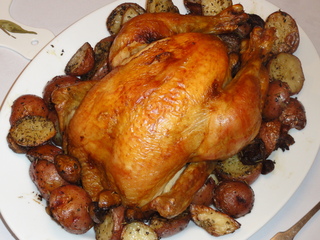 Capon roasted with oysters and chestnuts, from 1670

Fall in New England is an ideal time to roast all sorts of good things to eat. Firing up the oven warms the kitchen on cool autumn days, while making dishes based on such classic foods as pumpkins, apples, and turkeys suffuses the house with wonderful aromas. But sometimes making a whole roast turkey with stuffing provides just too much of a good thing, leaving too many leftovers. The recipe we give you today offers an alternative to roast turkey, one that is just as delectable but that better suits our smaller modern families. The surprising thing is that it's also part of the classic New England cooking repertoire.

The dish we're referring to, "To Rost a Capon with Oysters and Chestnuts," takes us back in time to 1670. A capon is a cockerel (young rooster) that has been "fixed." The result is a 7-9 pound bird whose flesh when cooked is more moist and tasty than that of other chickens.

We'll tell you more about the recipe in a minute, but first something about the cookbook where we found it—Englishwoman Hannah Woolley's The Queen-like Closet. Woolley's book is one of three English cookbooks that are known to have been part of the stock of Boston booksellers in the 1680s. Woolley's aim was to make the high-style cookery of the royalty and aristocracy familiar and accessible, bringing it within the means of the average upper-middle-class household. And in so doing, she inaugurated a tradition of English (and, in time, American) female cookbook authorship that has lasted right up to the present day.

And now for Woolley's recipe for roast capon.

How We Made It
If your local supermarket doesn't have capons in stock, it will probably order one for you. Ours arrived the next day. You can also substitute a roaster chicken, if you'd prefer. As for the chestnuts, they were out of season when we were making the dish, but dried chestnuts, which are readily available online, worked perfectly well. Again, you can make substitutions, such as walnuts, but the dish will taste best with chestnuts.

We trussed the capon and roasted it for 20 minutes at 450°, after which we reduced the temperature to 350°, basting the bird with butter every 20-30 minutes.

After an hour, we spooned off the drippings, and returned the capon to the oven,. Then we began making the sauce. To a cup of red wine (we used cabernet sauvignon, but any readily available variety will do), we added the drippings from the bird (including some of the fat), a tablespoon of butter, salt and pepper, and the remaining chestnuts, bringing the mixture to the simmer and stirring frequently.

About 20 minutes later, we tested the capon with a meat thermometer and found that it had reached the desired temperature of 165° F. The total capon roasting time was an hour and 40 minutes. In order to avoid overcooking them, we waited until this last minute to add the remaining oysters and liquor to the sauce.

And there you have it. "Rost" capon with oyster-chestnut gravy and stuffing, with lovely roast potatoes and green beans served alongside.

Our 7 pound capon with this amount of sauce made 8 servings, enough for a family dinner or a dinner party, with a bit remaining for another day. Featuring a bird that is nice and plump but is considerably smaller than the modern-day turkey, and with trimmings not that different from those that go with what has become the traditional Thanksgiving dinner, this spread would make an excellent Thanksgiving option for anyone who doesn't particularly enjoy the challenge of days or even weeks of turkey leftovers.

The original recipe, with commentary, can be found in Northern Hospitality, p. 186.