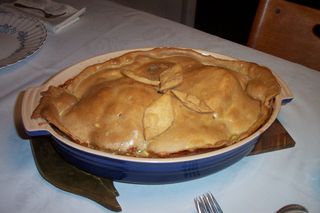 Puff pastry is that light, multilayered, buttery dough that rises impressively when it is baked and causes your guests to say "Oooooh!" It can be used as a pie dough, baked as a shell for sweet fillings such as ice cream or strawberries and whipped cream, or stuffed with lobster or chicken salad for an elegant lunch. Or it can simply be rolled and twisted into shapes such as twigs or pinwheels, sprinkled with a bit of sugar and cinnamon, and baked for a hand-held treat. In other words, puff pastry can be used in any number of ways to enhance both savory and sweet dishes.

Despite their deceptively plain recipe titles, Catharine Beecher's 1846 "Pastes Made with Butter" and "Directions for Making Paste" combine to offer both a great basic puff pastry recipe and an equally terrific technique for an easy way to make this impressive dough.

Here's a summary of the basic procedure, along with the ingredients and quantities needed to make one good-sized sheet of dough (enough for a single 9-inch pie crust): First make the foundation dough from Beecher's "Pastes Made with Butter" by using 1 stick of butter crumbled into pea-sized pieces in 2 cups of flour; moisten with ¼ cup or so of ice water and press into a ragged ball. Then following her "Directions for Making Paste," cut up the remaining butter (3 sticks) into ½-inch pieces, form them into rectangles (about 10 inches by 16 inches) on a floured board, dredge them lightly with flour, and roll them into thin sheets. Next roll out the foundation dough into a rectangle about 12 inches by 18 inches. Put a sheet of butter on the dough, dredge it lightly with flour, fold the dough in thirds like a letter, give it a 90˚ turn, and roll it out again. Then repeat the process until all the butter sheets are used up. It's that easy.

For those who prefer more detailed instructions, what follows is the process given step by step. But the preceding recipe snapshot illustrates that puff paste, made according to Catharine Beecher's method, is (almost) a cinch. Beecher's original recipes, along with comments by us, can be found in Northern Hospitality (page 252).

Here's what we did to make one sheet of puff pastry (enough for a single 9-inch pie crust).

The equipment:
1 rolling pin
1 large flat surface for rolling
1 mixing bowl plus two knives or a pastry blender, or a food processor with a multipurpose blade, or a standing mixer with a paddle attachment
2 sheets of plastic wrap (each about 18 inches long)

The steps:
Slice 1 stick of butter into pieces about 1 inch thick.

Measure the 2 cups flour into a bowl or the bowl of a food processor or standing mixer. Add the salt. (Catharine Beecher doesn't call for salt in her recipe, but because we used unsalted butter we added a little salt at this stage. If you use salted butter, omit this additional salt.)

Toss the butter with the flour until the butter is completely coated.

Cut the butter into the flour until the pieces are about the size of peas. You can accomplish this in a number of ways—by hand using two knives in a scissors motion or using a pastry blender, by pulsing the butter and flour in a food processor, or by mixing the ingredients together briefly in a standing mixer. Slowly pour ¼ cup of the ice water into the flour mixture and gently work the dough with your hands (or mix the dough briefly with your machine), just until it comes together in a ball.

If the dough doesn't come together quickly, drizzle in a bit more water. Stop adding water as soon as the ball forms. You don't want wet dough, and you don't want overworked (and therefore tough) dough. (It's better if you've got ragged bits coming out of your ball--you can tuck them in later--than if you've got a smooth but overhandled ball.)

Once formed, place the ball of dough on a piece of plastic wrap, cover it, and chill it for 30 minutes. This allows the dough to rest—and chill out. After resting and chilling, the dough will be just the right firmness to take the added butter in the next steps. You can skip this step if you're in a hurry (Catharine Beecher omits it), but it will be easier to work with your dough if you take the time to let it rest and chill.

Remove the dough from the refrigerator. Lightly dredge your board with some of the 1 cup of flour and roll out the dough into a rectangle approximately 12 inches by 18 inches and about ¼-inch thick. The length and width don't have to be exact, but you should aim for a rectangular shape so that the butter sheets can easily fit on top. Set the rolled dough aside.

Cut the remaining ¾ lb. of cold butter into roughly ½-inch pieces. Dredge your board well with some of the remaining flour. Place pieces of butter on the board, enough to form a rectangle slightly smaller than your dough (about 10 inches by 16 inches). Spread a bit of flour on your rolling pin, and lightly dredge the top of the butter rectangle with flour. Now roll it into a thin sheet, trying to retain the shape of a rectangle as much as possible. Sprinkle on a bit more flour if the sheet sticks to your rolling pin. If the butter is too soft to roll out, chill it for 5 or 10 minutes and try again.

Once you have one butter sheet rolled out, place it on top of the rolled dough, fold it in thirds like a letter, turn the dough 90˚ and roll it out, again forming a rectangle. Continue with rolling in the butter sheets, placing them on top of the dough, folding the dough in thirds, turning 90˚, and rolling, until all the butter is used up. Work as quickly as possible so that the buttery dough remains cold. If any of the components gets warm, you can place them in the refrigerator for a few minutes to re-chill. After the last sheet of butter is rolled in, fold your dough again into thirds, cover it with the second sheet of plastic wrap, and place it in the refrigerator to rest for another 30 minutes of so.

That's it! Take out your dough, and get to work making pie crusts, tart shells, pastry twists, or whatever shape or purpose takes your fancy. And a tip for using the inevitable leftover bits: After you've cut your dough, you can gather the scraps together, roll them out one more time, sprinkle the circle of pastry with sugar and cinnamon, cut it into strips, and bake it on an ungreased baking sheet in a preheated 375˚ F. oven for about 15 minutes, or until the pastry begins to brown and the sugar melts. Remove and cool the pastry on a wire rack. Now serve these scrumptious cinnamon strips to your admiring family!

Note: Beecher's technique of making sheets of butter to place on the dough simplifies the most difficult part of making puff pastry--the sometimes messy step of getting all that extra butter (¾ lb. in this case) into a fairly small foundation dough. And while the butter sheets are being rolled in, the dough is getting its necessary, layer-forming series of turnings and rollings. Although there are many fine modern instructions to be found for making puff pastry, Catharine Beecher's 1846 "Directions," combined with her "Paste Made with Butter," tops our list.

The original recipe, with commentary, can be found in Northern Hospitality, p. 252.